The UAS AOC is a NASA Centennial Challenge that fosters the advancement of unmanned air systems technology which is critical to their safe use in United States airspace. The competition will be completed in two phases. Rules for the competition are available here.

Phase 1 of the Challenge is scheduled to be held April 28 – May 7, 2014 and Phase 2 of the Challenge will follow approximately one year after a team has successfully met the requirements of the Phase 1 event. Phase 1 of the Challenge focuses on important aspects of safe ground and airspace operations, robustness to system failures, and seeks to encourage competitors to get an early start on developing some of the skills critical to Phase 2. 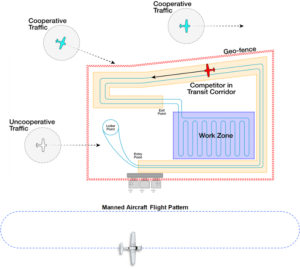 What You’ll Need to Compete

In order to participate in the competitions teams that include a pilot in command and ground crew must be able to operate the test aircraft using a ground control station located at the test site according to competition rules described below. Prior to competing, teams will be required to operate the test aircraft in a hardware-in-the-loop simulation environment on the ground. All aircraft will be equipped with competition furnished GPS (CFGPS) units that must be integrated into the aircraft control systems. Detailed specifications of the CFGPS units will be published according to the schedule published in the competition rules so that teams can replicate CFGPS for use in their own testing prior to the competition. These concepts are shown in Figure 2. 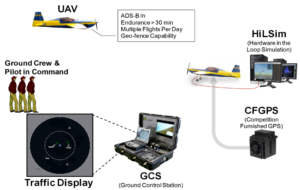 The Phase 1 Competition will focus on a competitor’s ability to operate a robotic aircraft that can:

The Phase 2 Competition will extend the requirements in each of the Phase 1 areas as well as add new requirements: 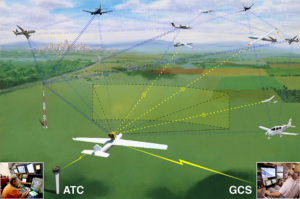