With a successful test flight of the reusable SARGE (Suborbital Autonomous Rocket with GuidancE)  sounding rocket complete, Exos Aerospace is looking to the future. The company plans to utilize the SARGE vehicle to launch payloads on a suborbital trajectory – allowing customers to test their technology before launching them into orbit. Additionally, SARGE will also serve as a testbed for the company’s plans for an orbital launch vehicle.

Exos is a small aerospace startup out of Greenville, Texas. The company’s goal is to make “SPACEavailable” by lowering the cost of access to space. Bringing the SARGE vehicle to market will be a major step towards that goal.

NASA’s Project Morpheus was a program which ran from 2010 to 2014. According to NASA, the purpose of the project was to provide “an autonomous, reusable, rocket-powered, terrestrial vertical take-off/vertical landing vehicle for testing integrated spacecraft and planetary lander technologies.”

The maiden flight of SARGE was an opportunity for Exos to test their version of the flight code.  The launch occurred on August 25th from Spaceport America in New Mexico. The Lox/Ethanol vehicle carried nine payloads including educational hardware, technology demonstrators, and memorabilia.

Following the launch, the Exos team has carefully analyzed the flight data. In a statement to NASASpaceflight.com, Exoscofounder and COO John Quinn provided some insight into the lessons learned.

He stated, “There were many things learned from the flight, most significantly that all the systems required to provide a successful recovery for the reusable vehicle functioned properly, the Morpheus flight code modifications (Under SAA) were successfully integrated and implemented, and that the modeling was appropriate to control a 13 degree pitch error at takeoff within one second as the model indicated.”

While the pitch error was quickly corrected, the rocket ended up aborting the launch prematurely due to a loss of GPS signal.

Quinn explained, “Loss of GPS for 20 seconds aborts the flight. The loss of GPS 18 seconds into the flight (resulting in a 38 second burn) was due to a rotation in excess of 360 degrees in a minute. Although an insignificant roll rate for the vehicle, it was enough to drop out GPS on a loss of an adequate number of satellites.

“While we could run the entire flight on the IMU, the GPS provides a heavily weighted reference to GNC, so we agreed with FAA to have a twenty second abort if the two solutions ever disagreed (as a safety measure).”

To prevent a loss of GPS signal in the future, “several mitigations have been implemented. The antenna for powered flight has been moved to the tip of the nosecone, and the redundant GPS has been augmented by a second GPS unit that has superior space application history over the one integrated into the IMU. Having the second fully independent GPS and a prime location for the antennae should make the GPS signal significantly more robust even in high roll rate scenarios,” Quinn added. 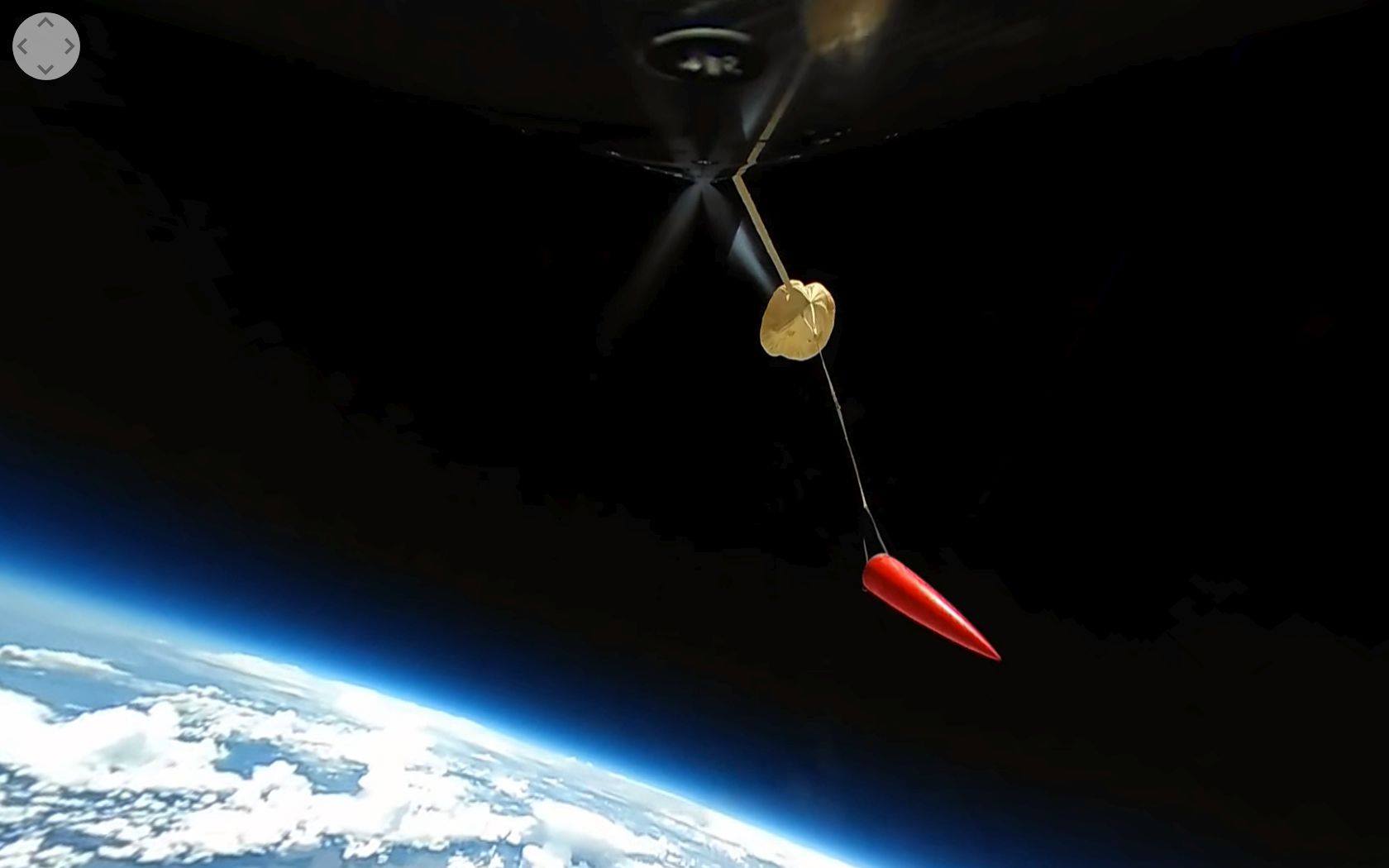 Following engine cutoff, the next phase of the mission for SARGE was to perform a Return to Launch Site (RTLS) recovery. To do so, the vehicle deployed a self-guided parafoil to steer the booster back to the launch site.

The recovery portion of the test flight was a major success. The booster for the flight  – designated SARGE R1 – was recovered in pristine condition.

Quinn stated, “SARGE R1 will fly again with >99% of the same components. On previous vehicle flights, the landing impact has damaged our gimbal actuators, yet on this flight, the sacrificial carbon fiber engine boat tail ring and one of four legs will need to be replaced.

Before returning to the launch pad, Exos wants to focus on its engines. Various upgrades are currently planned to maximize performance.

In terms of what some of those upgrades may include, “Exos has commended an engine evolution program and will build several more iterations to further improve ISP (to potentially carry heavier payloads) without having to reduce the weight of the intentionally robust vehicle,” according to Quinn.

Exos hopes to build and test two new engines before the next flight.

As for how this will impact the schedule, Quinn stated, “Given that the engine development is the long bar on the schedule, we will return to fly SARGE (R1) when we have completed that tasking and hopefully manifested a few more payloads. Year-end is our aggressive target, and the next flight will include a NASA REDDI FOP payload.”

Like the recent test, the next flight of SARGE will also take place from Spaceport America. Quinn explained, “[Spaceport America] has made it easy to fly there, so we expect to continue to host operations from there in the near future.”

The company has a five year contract with the spaceport, giving Exos a dedicated home for SARGE launches.

Looking into the future, Exos has plans beyond just sounding rockets. The company hopes to develop a reusable small satellite launcher named Jaguar. The orbital rocket will be capable of delivering 100-200 kilograms to Low Earth Orbit.

The SARGE program will act as a test bed for the Jaguar vehicle. Quinn considers this a significant advantage.

He explained, “while others are planning their orbital operations and designing their latest and greatest orbital launchers, we will be flying space hardware regularly. This will allow Exos to advance operational capabilities, increase flight tempo, and learn lessons in manufacturing and design as we push SARGE higher and harder striving for a 48-hour turn around to the next flight.

“Frequently flying ‘inexpensive’ flight hardware provides what we consider a leading edge risk mitigation plan, as we can develop and fly orbital hardware on SARGE anytime we want at a fraction of the cost of the orbital launcher we are developing.”

Once Jaguar is ready for the commercial market, reusability will be one of its key advantages. 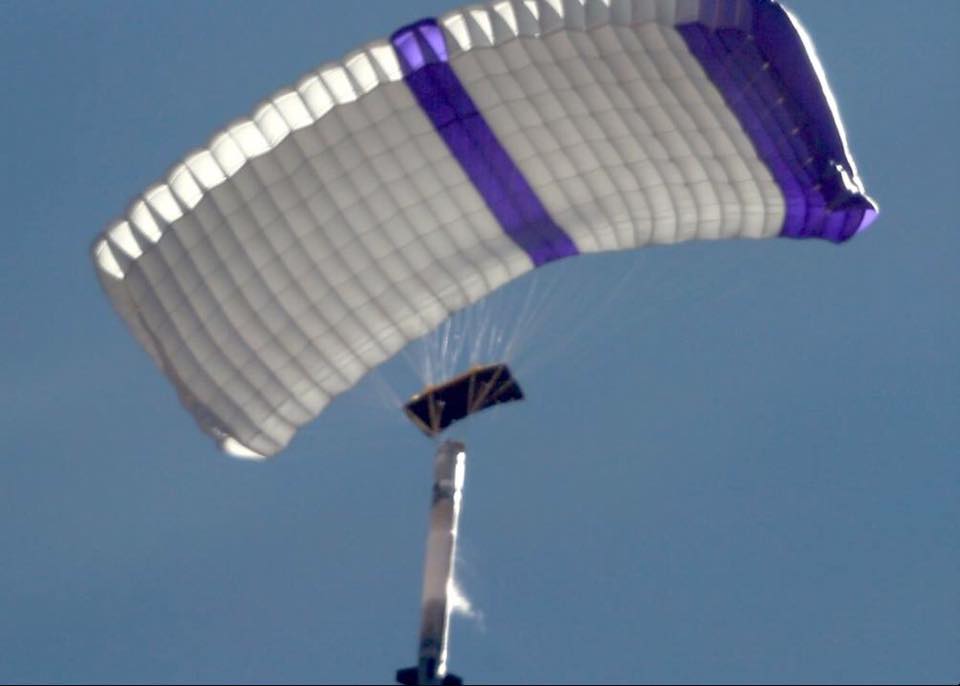 Many of the competing small satellite launch systems have bet against the concept – primarily due to the decrease in payload capacity. However, Exos believes that reuse is feasible.

To do so, the company plans to use a mix of propulsive maneuvers combined with a parafoil.

Quinn explained, “While early in development, the modeling to date shows a burnback maneuver and use of canopy will require a significantly lower vehicle liftoff mass than doing a propulsive landing on this class vehicle.”

Unlike SARGE, Jaguar’s first stage will be recovered downrange rather than returning to the launch site. Since orbital rockets travel much further down range than sounding rockets, Jaguar would have to utilize extra propellant to perform an RTLS.

Exos hopes to have Jaguar ready for commercial launches by 2022.

While there are still many milestones ahead before Exos can reach orbit, “Our focus is not strictly reaching orbit as so many are trying to do. At Exos we are focused on the milestones that support cost-effective execution…” explained Quinn.

“Our team is seasoned and our hardware is robust. Proving to the world that commercial space can be as predictable as general aviation stands as a worthy goal in our quest to make SPACEavailable… “