This Weekend Walkabout continues to catch up on some things I didn’t blog about while I was taking my holiday break.

We start off by hypothetically shooting things into the sun, then learn about the latest success from the Indian space program and wind up in Canada – learning about the Hudson Bay Space Elevator… 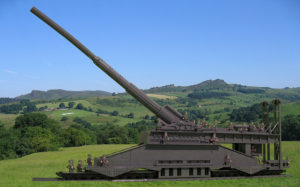 Have you ever been interested in shooting someone into the sun?  Want to know the physics involved and some of the problems you’re going to face?  Well, fear not – Mr. Ryan Hardy has done the research for you!  An answer posted by him over at Quora (and reproduced at Gizmodo, which is where I found it) makes it clear that, unless you are contemplating using a space elevator for this task, you are going to flatten and incinerate your payload.

I love this article – he’s actually run the numbers (something which is all-too-often sadly lacking in articles like this).  And humor abounds – I think my favorite part of the writeup was this;

Once the person makes it through the barrel, they will be immediately greeted by Earth’s atmosphere at Mach 90. The acceleration from the resulting drag would be comparable to the acceleration felt while coming out of the cannon, but in the opposite direction. The thermal loading would heat the air ahead of the person to tens or possibly hundreds of thousands of Kelvin.

So, in summary, you’ve embarked on one of the largest engineering projects in history and found a way to pulverize and incinerate a human being in less than three thousandths of a second.