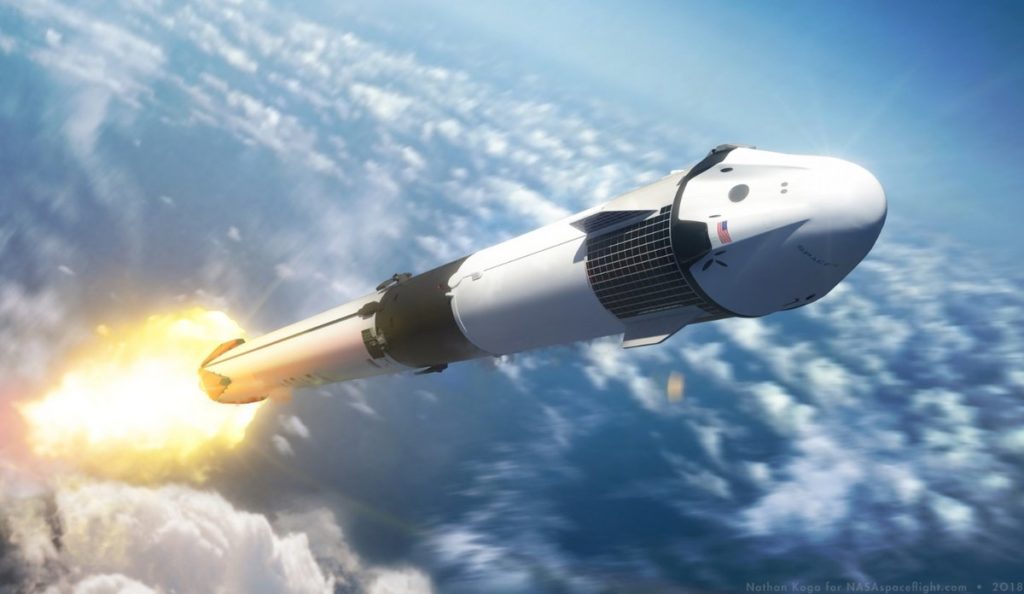 As part of a planned presentation to the NASA Advisory Council, NASA’s Commercial Crew Program manager, Kathy Lueders, updated the advisory council on the status of the investigation for SpaceX’s Crew Dragon anomaly that occurred in April.

Ms. Lueders did not go into in-depth detail but did highlight SpaceX’s daily communication with NASA, the “great job” done so far, and provided insight into changes that “might be” needed to the Crew Dragon’s SuperDraco system.

More so, Ms. Lueders revealed the readiness dates for the new Crew Dragon capsules that will fly the In Flight Abort and Demo 2 crew test flights.

Ms. Lueders began her overall update on all elements of the Commercial Crew Program to the NASA Advisory Council (NAC) by stating that “I think sometimes people don’t understand how much we are engaged and working with each of the providers as they’re performing these final critical test and verification activities.”

However, more than a month out, those questions and when information will be revealed to taxpayers is a more necessary question.  And curiously, it’s a question NASA does not appear to want to answer itself from a Public Affairs standpoint.

Last Thursday during an Apollo 50th Anniversary event at the Kennedy Space Center, Center Director Bob Cabana and NASA Administrator Jim Bridenstine were asked about the secrecy surrounding information on this anomaly and if taxpayers should be worried.

Mr. Cabana spent a little more than a minute praising SpaceX’s communication with NASA and emphasizing that there has been no secrecy from NASA’s contractor on this matter.

What NASA Public Affairs then edited out of the publicly released video of that Question and Answer session was Administrator Bridenstine stepping in to admit that communication on this issue had been poor – though exactly which agency’s communication he was referring to, NASA or SpaceX, was ambiguous.

The irony of a government agency – which spends taxpayer money – editing out its own Administrator’s comment that communication was poor underscores just what Mr. Bridenstine was saying about the agency he leads.

All of this does raise the legitimate question of who should be the one disseminating information.  On the one hand, NASA is the government agency that has spent taxpayer money on the Crew Dragon and Starliner systems by contracting with SpaceX and Boeing to build and provide these services.

On the other hand, SpaceX and Boeing are the ones using that money; but they are – technically – NASA contractors with a sole obligation to provide all anomaly information to NASA, not the public.

As seen last year with the Boeing anomaly and now this year with the SpaceX anomaly, NASA has an apparent unwillingness to communicate about these issues beyond the bare minimum when NASA is, in reality, the agency in charge of this initiative and the agency that has received all the information on the anomalies that occurred during taxpayer-funded initiatives.

And this overall frustration with a narrative that SpaceX and Boeing are not communicating about their anomalies was present in Ms. Lueders’ presentation to NAC, where she spent a good deal of time praising provider communication and driving home how much NASA has been involved from the very beginning with both providers. 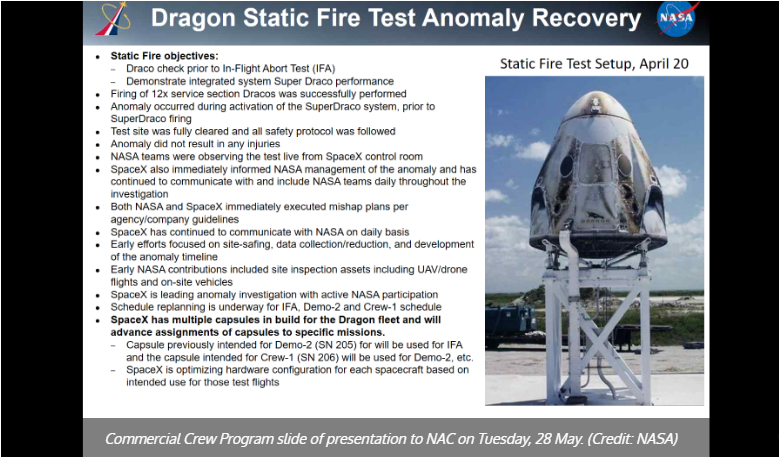 For SpaceX in particular, in addition to NASA personnel being in the control room during the SuperDraco static fire test, Ms. Lueders noted that NASA and SpaceX “immediately executed the mishap plans per the Agency-Company guidelines” and that “from day one as we worked through the early efforts that focused on getting the site cleaned up and collecting all the data and getting the anomaly timeline down, NASA has been helping out with different site inspection assets to help SpaceX make sure they’re collecting all the data they can.”

This led to an interesting series of statements from Ms. Lueders regarding the parts of Crew Dragon’s propulsion system that “may need to be modified” to prevent this kind of anomaly in the future.

During this part of the presentation, Ms. Lueders repeatedly used the phrases “may need” and “might” to refer to potential changes in the SuperDraco propulsion system.

This language is admittedly not common in the aftermath of anomalies of this kind that have historically in the U.S. human spaceflight arena always led to some kind of significant change to the vehicle.

To this end, Ms. Lueders’ language could be read one of two ways: the first being that she was simply hedging her language as the investigation has not revealed the root cause of the anomaly at this time and therefore changes “might be” coming via information revealed at a later date. 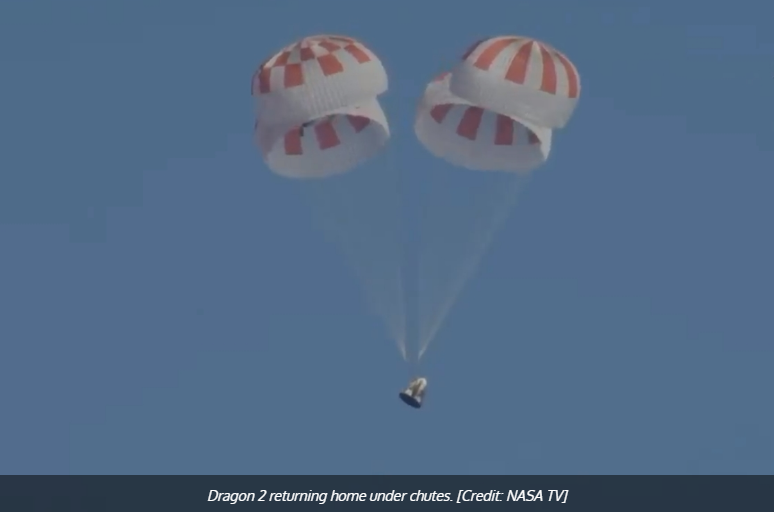 If the second option is where the investigation is currently pointing, it would show that there is no issue with the SuperDraco system as designed for its purpose of pulling the SpaceX Dragon capsule safely away from a failing Falcon 9 in the event of a launch accident and that the anomaly’s cause occurred during or after splashdown and after the SuperDraco system is needed.

This second option would likely make the root cause issue a maintenance requirement following splashdown (hence Ms. Lueders’ “may be” and “might” language) and that SpaceX and NASA could decide that no changes are needed to the SuperDraco system as SpaceX could simply swap out the SuperDracos on the Dragons before they are subsequently used for cargo runs to the Space Station after their initial crew flights.

Still, in the early weeks of the investigation, Ms. Lueders emphasized that subsequent Dragons currently in production are being kept in a state that would enable access to the SuperDraco system to allow SpaceX to make modifications or changes if the investigation shows that to be necessary.

“Right now they are still making progress on the Demo-2 dates, but one of the key things is to make sure that we are understanding [the anomaly and that] we don’t want to close out the parts of the vehicle that might need to be modified,” noted Ms. Lueders.

“I think the team’s been doing a really good job of making sure they are managing this build that allows for any upgrades to support the learning that’s coming down from the anomaly investigation team.”

New dates for In Flight Abort and Demo-2:

Even with the anomaly that occurred last month, Ms. Lueders was able to update the NAC directly on the current hardware readiness dates for the In Flight Abort test and the Demo-2 crew mission, both of which now have to use different Crew Dragon capsules than originally planned.

According to Ms. Lueders, SpaceX will have the Falcon 9 rocket and Crew Dragon capsule hardware ready for the In Flight Abort test by the end of July, just two months from now.

Because SpaceX has multiple Crew Dragon capsules in flow for the Commercial Crew Program, and the Demo-2 capsule – as originally assigned – already carried a hardware readiness date of July 2019, it is no real surprise that SpaceX will be able to have that capsule “hardware ready” for its new role as the In Flight Abort vehicle at the time previously stated (assuming no SuperDraco changes are needed).

Another element aiding the schedule at this point is that “SpaceX is optimizing hardware configuration for each spacecraft based on intended use for those test flights,” noted NASA’s PowerPoint presentation to the NAC.