NASA has released information regarding the U.S. space agency’s payloads that will launch on the Air Force’s STP-2 (Space Test Program -2) mission on SpaceX’s Falcon Heavy rocket later this month.

Meanwhile, in Florida, Landing Zone -1 (LZ-1) has been cleared to return to normal operations following the Crew Dragon anomaly on 20 April, paving the way for the site’s use as one of the landing locations for one of Falcon Heavy’s side boosters.

The third Falcon Heavy mission is set to launch No Earlier Than (NET) Monday, 24 June 2019 from LC-39A at the Kennedy Space Center, FL.  The day’s launch window opens at 23:30 EDT and will mark the Falcon Heavy’s first night launch.

In all, four NASA payloads will ride-share their way to orbit aboard the Falcon Heavy during the STP-2 mission, managed by the U.S. Air Force Space and Missile Systems Center.

The NASA payloads, four of the 24 total payloads on this mission, are designed to test a variety of technologies that the agency hopes will one day improve upon current spaceflight technologies.

This experiment will be the world’s first ion-based atomic clock to be flown in space with the goal of dramatically improving space-based navigation via timekeeping pieces 50 times more stable than the GPS atomic clock.

To this end, the Deep Space Atomic Clock (DSAC) is built to maintain timekeeping accuracy to within one second over 9 million years.

First and foremost, this experiment seeks to demonstrate an atomic clock’s operation in Low Earth Orbit to validate the functionality of the device as well as test its capabilities for future applications on deep space missions.

While it might seem trivial that a spacecraft carry an atomic clock for navigation purposes, the application’s benefit is made clear when its potential streamlining of navigation services are compared with current deep space probe practices.

Presently, pinpointing a spacecraft’s position in space and determining its precise trajectory involves sending a radio navigation beam from Earth toward the spacecraft, bouncing that radio wave off the spacecraft, and then measuring how long it takes the beam to return to Earth – a process known as radio echo.

From that transit time and return direction, scientists can calculate a probe’s trajectory, distance, and velocity compared to Earth and therefore gain an understanding of its trajectory through the solar system.

In this manner, tracking a spacecraft through the solar system is a fundamental problem of tracking time.

Developed over the last 20 years by engineers at NASA’s Jet Propulsion Laboratory in Pasadena, California, the DSAC is a miniature, ultra-precise, mercury-ion atomic clock that is orders of magnitude more stable than the best navigation clocks in use today.

By implementing this technology on deep space probes, it would effectively cut the process of navigating a spacecraft in half by eliminating today’s radio echo method of tracking.

Instead, the DSAC would send an ultra-precise time signal directly to Earth from which the exact same data garnered by radio echo could be discerned.

This one way tracking with high precision accuracy would provide a more flexible way of tracking a spacecraft and navigating through the solar system while also shifting to a more efficient use of the Deep Space Network – which would be freed up from radio echo tracking of one spacecraft at a time to tracking multiple spacecraft at the same time.

Moreover, it would enable autonomous, real-time spacecraft navigation of our deep space probes and would – for human mission implementation – be able to deliver a spacecraft to a more precise landing site with less uncertainty.

Following launch, the DSAC will be powered up in August with preliminary results returned to Earth in the fall.

In total, the technology demonstration carries three main objectives: 1. Demonstrate performance of the clock in a long-term LEO environment; 2. Demonstrate that the clock operates for a year in space uninterrupted; 3. Perform DSAC analogue experiment (process tracking data that mimics deep space navigation, like a Mars spacecraft).

Beyond its navigation prospects for deep space probes, DSAC could also enable the creation of GPS networks around moons and other planets in our solar system, specifically Earth’s moon and Mars.

In this manner, non-Earth GPS networks would work the same as the current GPS constellation, with moon- and planet-wide orbital networks of satellites containing DSACs transmitting radio signals down to receivers – radio signals that would then be converted into precise time and location information for users.

While this is just a technology demonstrator at the moment, NASA said the possibility of including DSAC on the next Mars telecom satellite in support of NASA’s upcoming Mars Sample Return mission is a possibility – though an exact timeframe for such a satellite is currently unknown.

The Green Propellant Infusion Mission (GPIM) will provide an in-space test for a new green propellant that has been developed over the last two decades by the Air Force Research Laboratory at Edwards Air Force Base, CA.

The propellant in question, named AF-M315E, is an “innovative, low-toxicity propellant” that will provide a green and safer alternative to today’s highly toxic hydrazine fuel used for spacecraft in-flight propulsion. 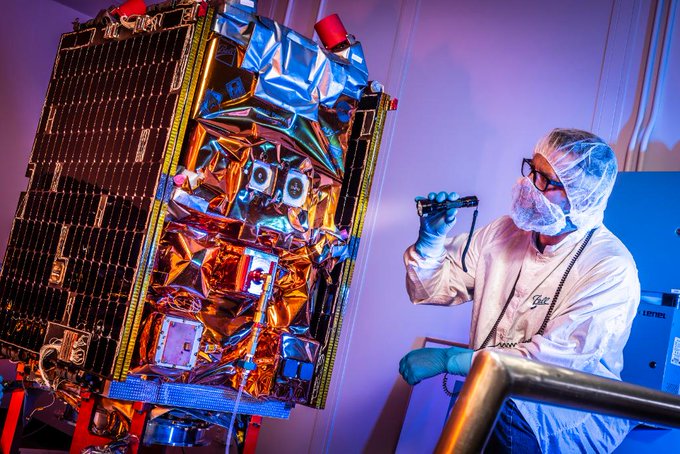 According to NASA, “NASA and its partners always strive to maintain the strictest safety standards for storage, transport and use of rocket propellants.  While all rocket fuels can be dangerous to handle without the proper safety precautions, AF-M315E has significantly reduced toxicity levels compared to hydrazine, making it easier and safer to store and handle.”

AF-M315E itself is a Hydroxyl Ammonium Nitrate fuel/oxidizer blend that costs roughly $500,000 less to process, handle, transport, and load into spacecraft than hydrazine.

Moreover, it can be transported commercially in U.S. Department of Transportation approved containers, can be loaded into satellites and probes before they ship to their launch locations, and can be loaded by personnel wearing gloves instead of full, pressurized SCAPE (Self-Contained Atmospheric Protective Ensemble) suits.

Moreover, AF-M315E’s crystalline fuel structure undergoes a glass transition at cold temperatures but does not freeze as hydrazine does at the same temperatures.

This is important because in a glass transition phase, AF-M315E solidifies but does not expand – meaning mission engineers do not have to keep AF-M315E from solidifying in order to prevent the spacecraft’s fuel lines from rupturing as they do with hydrazine – because when hydrazine freezes, it expands and ruptures fuel lines.

To this end, use of the AF-M315E green propellant would free up electricity normally used to keep hydrazine heated above freezing limits to power other elements of the mission and scientific objectives.

The new propellant will be tested on a small spacecraft that will use five 1 Newton thrusters to perform various orbital operations –  including deorbit, with the goal of re-entering the experiment into the atmosphere within a couple of weeks.

But perhaps an even greater demonstration of this fuel’s prospect is the fact that numerous missions are already in line to use it for in-space maneuvering pending a successful outcome of this technology demonstration.

The Space Environment Testbeds (SET) experiment will fly and operate inside the slot region between the two doughnut-shaped regions of the Van Allen radiation belts around Earth.

While the Van Allen Radiation Storm Belt probe mission, a set of two identical spacecraft that have spent the last seven years investigating and characterizing the Van Allen radiation belts, have done a great job of exploring the inner and outer belts, they were not designed nor have they greatly explored the slot region.

This is where the SET experiment will fly, with a specific mission task of characterizing the harsh space environment near Earth and how it affects spacecraft in their instruments.

Dr. Nicola Fox, director of the Heliophysics Division of NASA’s Science Mission Directorate, said that scientists are aware of the effects of space weather and radiation on satellites, and ensuring that we build robust satellites is key.

But so is making sure we don’t build over-robust satellites.  As Dr. Fox related, “We don’t want to put a battleship into orbit when a dinghy will do.” 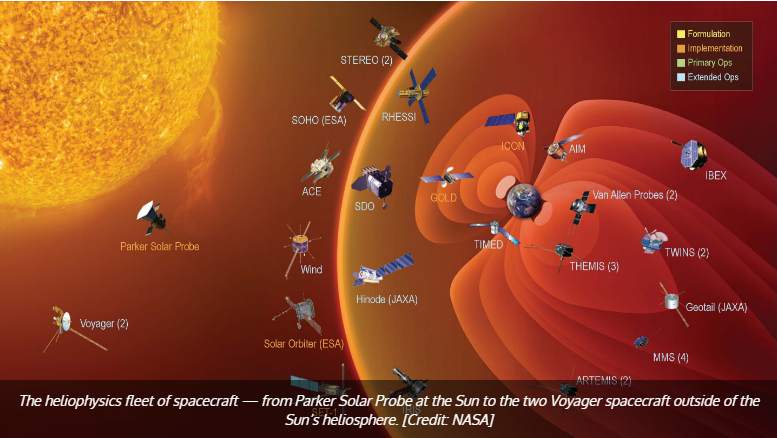 The types of space weather and radiation of most concern for space probes are energetic particles that can cause computer and hardware damage – and these particles are exactly what the Van Allen radiation belts trap.

Thus, while protecting spacecraft against radiation is a key to spacecraft functionality, so too is understanding the best possible places to put them in orbit around Earth.

And one of these idea locations might be the slot region between the two Van Allen radiation belts as this region has less radiation than other parts of near-Earth space.

The Van Allen radiation belts themselves trap protons and electrons, the exact energetic particles which spacecraft designers have to protect against.

Thus, part of the SET mission is designed to characterize the environment of the slot region and determine the proportion of energetic particles trapped there and whether they emanated from the Sun or come from sources outside of the Sun’s heliosphere.